From behind him, he felt a cool sharpness slam into the middle of his back. A low and gurgling growl ripped from his chest uncontrollably. Vibrant crimson blood bubbled past his lips and slid down his chin. It spotted the front of his tunic and dripped to the ground. A white-hot searing pain shot through his side, into his back, and rocked him to the very core. Abraxas had never felt something that was so painful.

There was only one kind of injury that could have slammed the forethought of his mind with blinding agony. The sticky feeling of blood slid down his skin and stuck his tunic to the muscled arch of his back. When Abraxas looked down, all that he could see was the better half of a sword sticking through the middle of his abdomen. The deadly metal seemed to shimmer in the orange light of the blazing camp. He stared down at the sword skewing his midsection as if he were entranced by the gravity of what was happening to his body.

More of the startling blood spilled from the now-gaping wound in rich spurts. A hand against his middle tried to still the blood flow but was unsuccessful. He felt himself begin to pale at an alarming rate. His head was spinning as the sword was dropped to the ground with a clattering noise. In an instant, he crumbled to the ground.

First, he dropped to his knees and then fell on his chest. His world went hazy from the substantial injury he had sustained. His observant eyes became far too heavy to hold open on their own. Yet, he was too weak to close them either. There was no way that he was going to be able to stay conscious, Abraxas decided. Facedown in the dirt, the prince tried to fight the temptation of resigning himself to death.

Abraxas never thought that dying would be so painful. His entire body ached from the tip of his fingers to the very soles of his feet. Pain ran amuck inside of him and caused his brain to be unable to comprehend anything else. As he began to slip into the blackness, he saw a pair of booted feet pass into his view. Abraxas could feel his weakening heartbeat against the dirt beneath him as he watched with blurry vision as his killer bent down to pick up their sword. You must earn your release, Abraxas Hadean.

Nothing in this world will be given to you for free. Everything comes with a price, little prince. His eerie red eyes were a sign of Rausolian royalty and were narrowed at the gold devil. Unlike his siblings, his hair had a slightly vermillion tint to it. It was an aspect that he had gained from his mother, who had died years ago.

Abraxas was confused. This demon god had ensnared the very core of his wants. Abraxas did not know how he would survive this with his soul intact. Know that once you hear my screams, no others will ever satisfy you. The demon smirked at that little comment. There was something about this beast of a devil that caught him off guard. Abraxas had always been in control of every situation and aspect of his life. In this darkness, his entire prowess became inadequate.

What had gotten him through his youth, adolescence, and early manhood was of no use in this dark and desolate place.


The demon that had captured him was so powerful that he could feel the very electricity of his dominance sparking the air about him. There was no way that his sizeable human strength would translate into any real force when faced with a demon. The shadows snaked out to capture his wrists, rip his muscled arms upward, and pin them in a splayed position. His ankles were given the same treatment, which caused his legs to be pinned in a very open position.

Abraxas became aware of how vulnerable that he was in this situation. His devil had slunk of into the shadows and left only the echo of a predatory growl in his wake to give him any indication that he was indeed still there. Even if he could no longer see the demon, he could feel the incessant weight of those glowing golden eyes looking upon him.

Abraxas could feel them linger in the defined lines of his rigid muscles. Abraxas knew that he had the body of a warrior. As he looked down, he surveyed that he was heavily muscled but slender enough to be light on his feet. He knew whips well, considering that he had to use them when training his horse and in some emergency combat situations. Abraxas knew that the only part of the whip to touch him was the popper, a small braided piece of cord that was connected to the tong of the whip. The most painful part, the part that did all the damage, was the small knot that had been tied in the popper.

Abraxas had often wondered how such a small thing could cause so much pain. An unhindered cry ripped free of his lips and echoed into the ominous void. The tip of the whip had sliced into the tender meat of his shoulder as it trailed downward.

Blood quickly pumped to the surface of his skin and out the open wound to form what felt akin to a sticky stream that ran down the small of his back. Abraxas yelled again, and this time there came with it a slew of obscenities. Abraxas could feel an enraged red welt that would most likely appear on his skin, just where the whip had hit him. Much to his surprise, the smell of his own blood invaded his senses as ruby gems came oozing to the surface of his skin.

Barbecue and Pillow Talk. You Ain't Seen Nothing Yet. Heart Of A Cowboy. The Werewolf with the Dragon Tattoo. In the Devil's Snare.

In the Shadows of the Suns. Do you already have iTunes? 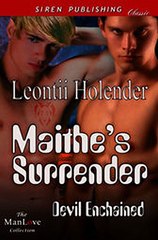 Click I Have iTunes to open it now. View More by This Author. More by Leontii Holender. In the Shadows of the Suns [Heathen Gods 1]. See if you have enough points for this item. He's a driven man with a logical mindset that leaves no room for the belief in ghosts, spirits, or things that go bump in the dark.

Much to his dismay, a loss of employment leads him to move back to his kooky New England hometown, a place filled with people who believe in all things supernaturaland where everyone seems to have a secret. On top of it all, his neighbor is the son of a Norse god.